In a Letter to the Editor published on April 30 on ljworld.com, Artful Marketing’s president, John Wysocki, took issue with a recent Journal-World editorial, Planning vision. While Wysocki agreed that it would be useful to identify a ‘broad vision for the future of Lawrence’ as part of any long-range city planning process, he noted that the editorial failed to include any mention of the arts in such a vision.

Here’s the full text of the letter, which was published with the title, Arts vision:

‘I agree with the World Co.’s recent “Planning vision” editorial that “Setting a broad vision for the future of Lawrence could be a useful part of the long-range planning process.” However, while many aspects of such a vision were alluded to in the editorial, one aspect of Lawrence’s rich cultural heritage that was not mentioned was the town’s thriving arts community. This seems to be a rather curious oversight since — as I’ve recently commended them online for doing so — the World Co. has been giving a lot of press to the arts lately and, in particular, to the city’s so-called Cultural District. If and when Horizon 2020 [Lawrence’s Comprehensive Land Use Plan] is updated and/or replaced with a more appropriate planning document, I hope the arts are included as an integral part of the broad vision for Lawrence’s future.

As an aside, it might be useful to note that the editorial unfairly characterized a potential new Horizon 2020-style multiyear process as “grueling.” I was involved in Horizon 2020 and participated in one of its subcommittees to do with quality of life issues, and it was one of the most interesting and enlightening community-focused processes I have had the good fortune to be involved in. Such a process, by its very nature, was extensive in nature but everyone who participated was committed to the process. Grueling, no. Great, yes!’

Five mistakes that bloggers should avoid when posting stories

While most bloggers or authors have informative content to communicate with their posts, sometimes the way in which they are written or formatted dissuade the reader from being fully engaged with the post’s subject matter.

Five mistakes that bloggers should avoid when posting stories are:

Posted in Commentary, Resources for professional artists | Leave a comment

If your social media accounts – especially your Facebook page and Twitter account – purport you to be a business or organization it’s better to say ‘we, us, our’ than ‘I, me, mine’ when posting, even if you’re a one-person operation. Otherwise, it’s ambiguous as to who’s doing the posting and makes you appear to be acting alone and promoting a personal philosophy. Of course, you could identify yourself by name and title in every post or tweet – e.g., Peter Jones, CEO – but doing so in tweets would, obviously, use up more characters, which are already at a premium. ‘I’ should ideally be reserved for personal social media accounts only.

In a Letter to the Editor published today on ljworld.com, Artful Marketing’s president, John Wysocki, suggests that, if Kansas became known as a state for its creativity in such spheres as the visual, literary and performing arts, it ‘might ultimately put us back in the forefront of national debate as a shining example of what’s good with Kansas and reverse the seemingly incessant trend of being the butt of embarrassing jokes.’

Here’s the full text of the letter, which was published with the title, Creative state?:

‘Maybe Lawrence’s officially defunct moniker of “City of the Arts” should now be regurgitated and revamped to be more inclusive, as the “City of Creativity?”

In a recent Journal-World editorial, it was noted that “A recent $500,000 gift to Kansas University’s School of Engineering is more than just a nice boost to the university’s fundraising efforts,” and that “several state leaders are pushing hard to make the attraction and retention of engineering firms a cornerstone of the state’s economic development strategy.”

In response, the Journal-World suggests that “Lawrence leaders now need to position the city to capitalize on this movement” and attract “creative business professionals of all types: architects, publishers, designers, programmers and others.” The editorial concludes with a challenge: that “Lawrence ought to set a goal of becoming the Creative Capital of the Great Plains.”

While this sounds admirable, and not beyond the realm of possibility with the right kind of visionaries taking the reins, let’s include all of the creative arts — including the visual, literary and performing arts — under the banner of “Creative Capital!” But wait a minute, isn’t this what Gov. Brownback is proposing at a state level with the proposed Kansas Creative Industries Commission?

Becoming a state known for its creativity — and not the creationism kind — might ultimately put us back in the forefront of national debate as a shining example of what’s good with Kansas and reverse the seemingly incessant trend of being the butt of embarrassing jokes.’

Artful Marketing’s president, John Wysocki, was recently retained as Campaign Manager for architect Sven Alstrom in his bid for a seat on the City Commission of Lawrence, Ks. Wysocki also designed the candidate’s new website [archived 2011 site], which utilizes the WordPress platform, and changed the site’s original theme from Greenblog to BorderPx with appropriate modifications; and coordinated collateral marketing materials, including the candidate’s Facebook Like page, Twitter account, donation flier and yard sign. Make a difference and vote for Sven on April 5th, 2011!

Posted in Social media, Website design and maintenance | Comments Off on Wysocki retained to manage election candidate’s campaign and website

Organizations: are you aware of how you are being portrayed with social media tools such as Facebook and Twitter – especially if you have not instituted etiquette guidelines for the person posting your announcements for everyone to read?

Posted in Commentary, Resources for non-profit organizations, Social media | Comments Off on Etiquette guidelines for posting messages on Facebook and Twitter

Per the recently announced News Release, ‘City seeks citizen input about website,’ issued by the City of Lawrence, Ks on Tuesday, February 15, 2011, here’s one suggestion:

The menu on the left side, which lists City Commission, Resources, etc., and the main navigation links at the top of the page – as featured on this very page  – should always appear on EVERY page to make it easier to navigate to another part of the City’s site.

An example of why this is important is found on the Social Service Funding page – which does NOT include the menu for City Commission, Resources, etc. – but instead has replaced it with its own ‘internal’ menu. Such internal menu should be included in addition to the City’s main menu NOT replace it. Perhaps the right side of the page is where internal menus for specific city departments, advisory boards, etc., should be located?

Note: The above suggestion for improving the City of Lawrence’s website was submitted to the City via their online feedback form. Other suggestions are encouraged.

Posted in Commentary, Website design and maintenance | Comments Off on Suggestions for improving the City of Lawrence’s website

Artful Marketing’s president, John Wysocki, recently designed and built a new website for his own marketing company that utilizes the WordPress platform and its Twenty Ten theme. While WordPress is usually used for blog sites, which feature diary-type commentary, Wysocki wanted the design to feel more like a traditional website by using several pages that remained somewhat static in content. Note: Artful Marketing’s legacy website is still operational and will be retained for a while. 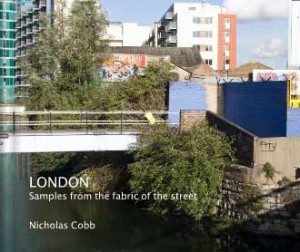 Artful Marketing’s president, John Wysocki, recently edited a collection of photographs taken by London, UK artist Nicholas Cobb that was self-published by the artist in January 2011 as LONDON: Samples from the fabric of the street. The collection was drawn from Cobb’s three previously self-published volumes in his LondonStreetViews series and distilled down into one coherent body of work by Wysocki.

Here’s what Wysocki said in the Editor’s Notes that appeared in the publication:

“When I edited Nicholas’ three original LondonStreetViews collections to distill them down into one coherent body of work, I tried to reveal the aesthetic style that Nicholas consciously (and subconsciously) would have used to create his compositions. As a photographer myself, sometimes it is not apparent what one is trying to capture or how a particular approach is being used until after a body of work has been produced and, perhaps more importantly, critically analysed.

Rendering spatial depth as picture planes, so as to appear flat or painterly, served Nicholas well as a means to achieve his compositions and provided a clue as to how the work should be edited and organized into a definitive collection. It is obvious that Nicholas’ art-school background and twenty years of painting abstracts have exerted their influence on his photographic approach in this collection of images, especially as the collage-type photos make clear.

While this collection of disparate images, by its very nature, does not have the narrative thread that ties together Nicholas’ photographs of miniature dioramas he has built – including an office park, shopping centre car park and high streets – it is nevertheless imbued with certain unifying aesthetic threads.

Nicholas set himself the formal task of looking for very specific compositions on his excursions into the urban landscape rather than relying on chance to capture fleeting images. That most of his photos are devoid of inhabitants undoubtedly made his task easier to accomplish. What Nicholas has captured in his inimitable style is an essential element of urban life – the urban fabric of streets and buildings that make up the urban environment itself.

John Wysocki is a professional photographer and arts promoter who was born in Peckham (and used to frequent Rye Lane, subject of one of Cobb’s dioramas, in his youth) and moved to Forest Hill before being awarded an exchange scholarship by University College London for an M.Arch. program in Lawrence, Kansas. 30-odd years later he is still living in the US and is heavily involved in the arts, and always on the lookout for the work of talented artists to promote and artists’ careers to mentor.”

About Nicholas Cobb
“Nick is an artist and educator who moved from abstract painting 6 years ago to concentrate on building and photographing miniature dioramas. He has built up a body of work which includes office parks, shopping centre car parks, replicas of London city streets and fast food restaurants. Each project ends its life as a series of narrative images which culminate in the production of a photobook. He has exhibited extensively. His recent work has been influenced by the late novels of J.G. Ballard.”
– Nick Cobb 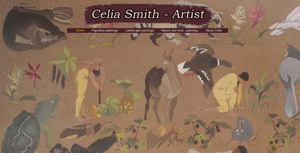 Artful Marketing’s president, John Wysocki, recently designed and built a new website for Lawrence, Ks artist Celia Smith. The design utilized proprietary drag-and-drop website-building software provided by Homestead, who also hosts the site. A unique aspect of the site is the home page, which features a singular background image that fills screens up to 1920 pixels wide without horizontal tiling and unduly taking too long to appear. Wysocki additionally provided site-maintenance training to enable the artist to update the site’s content herself, especially by uploading new artwork images. The website was limited to five pages to take advantage of Homestead’s affordable monthly hosting plan and design work was completed in January 2011.